Welcome to Polyface farms. On April 11, 2009 I rolled into Swoope, VA to meet up with Joel Salatin. Swoope is a beautiful wide spot in the road in the Shenandoah Valley. The ladies at the post office were helpful in getting me turned around in the right direction. Finally, here I am driving into Polyface Farm.

As you’ll learn, Polyface is a family operation running for many decades. Joel and his family focus on raising organic (and beyond organic) cows, chickens, pigs, rabbits and vegetables. These cows greeted my arrival with great enthusiasm. You can see it in their eyes, really excited!

I joined Joel that day as he gave a tour to about 20 local college students from James Madison University. All his livestock are pasture-raised meaning that they spend most of their time foraging on grassland. Polyface is 550 acres with 150 in woodland.
Rabbits
Our first stop on the tour was at some movable rabbit hutches.  Meet Joel (in the hat) and his rabbits (in the hutch). 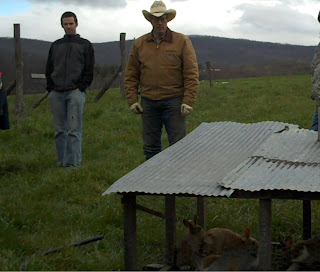 Polyface rabbits were started by Joel”s son as a 4H project.  Starting with commercial rabbits who’s genetics were not forage-based, it took 5 years of line breeding (no outside genetics) with up to 50% mortality rates until he achieved these forage-based commercial rabbits who could thrive, as wild rabbits do, on grass. Joel is a believer in developing stock that is acclimatized to the farmer’s specific region rather than just depending on heritage breeds, most of which were developed in Europe hundreds of years ago.
Joel supports building North American breeds to add to the cornucopia of choice for his grandchildren because every breed carries genetic memory of its bioregion. Notice how inexpensive the infrastructure is. The hutch is moved daily providing new forage for the rabbits and adding their effluents to fertilize the ground over a large area. In the winter these animals are housed in a hoop house with the chickens. When the hoop house is emptied in the spring and the chickens and rabbits hit the pasture, Joel plants corn inside utilizing the nutrients from the chickens and rabbits and getting a jump on the corn season.
Chickens
Pasture poultry is a centerpiece of Polyface Farm. This picture is of Joel’s “broilers” (meat) chickens.  They are “industrial” chicks compared to the “layers” that are heritage chickens for egg production. They are started indoors at a few days old.  At three weeks they come out to the pasture, weather permitting. 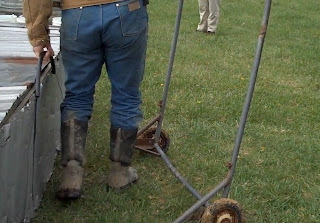 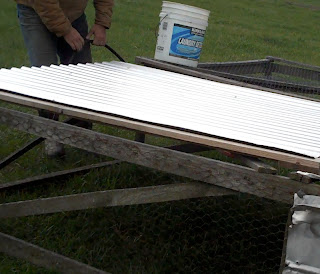 One person can move 5,000 birds in one hour. There is no manure to haul, no odor, no flies, just healthy chickens.
Joel believes the creation of this food should be aesthetic, aromatic, and a sensual romantic pleasure. After all isn’t that what you would like in a meal when you sit down at the table. Instead, our industrial food system has an obnoxious affect on the human olfactory and sensory system to such an extent that we have to hide livestock confinement production as far out of site and out of mind as possible … and then expect people to have an integrity relationship with a plate of food.
Here Joel shows that he isn’t a Luddite, farming only like grandpa used to, but takes advantage of technology like this lightweight and portable fencing with built in electrical wires to keep out predators. 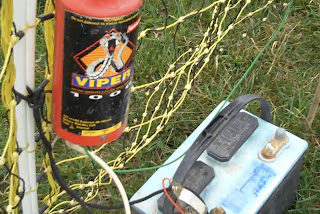 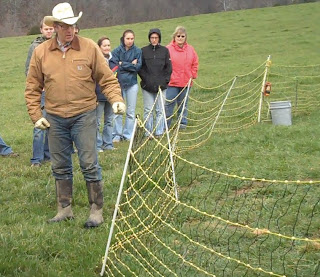 Like we hear about crop rotation for vegetables, Joel does the same with animals where his chickens follow the cows so they can eat all the goodies the cows leave behind as well as forage in the grass for grubs.  Joel will also supplement their feed with some grain.  Joel makes the point that his broiler chickens come from commercial stock, as they are the breeds of choice for consumers.  It is after all, a business … but these birds are healthy, happy and after one bad day … taste great.
Joel raises other hens (layers) for their eggs. Here is one of his movable egg-mobiles. 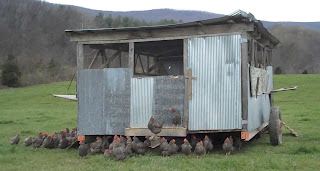 Again, nothing fancy.  For the same reason he keeps moving the broiler chickens, he moves the layers as well so they add to the bio diversity of his pastures and they benefit from the grubs, worms and fly maggots in the ground.
Joel uses nocturnal guard dogs that are working dogs. The dog bonds with the chickens and keep predators away.  This pup is a cross between an Anatolian Sheppard and an Ockbosh. 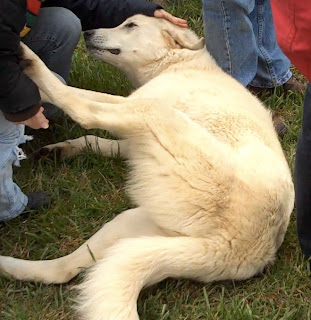 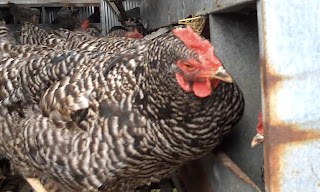 These hens add about $30,000 to Joel’s operation per year.  Joel warns not to move the coop in the daytime because the chickens might get lost coming home.  He moves the coop at dusk when they all have come home to roost.  Keep in mind how small a chicken’s brain is.
Pigs
The pigs on Polyface farm also are pasture raised.  There are a lot of forested areas on Joel’s 550 acres, which turns out to be great grazing for pigs.  They eat weeds and root around for acorns, which clears out the area for new pasture under growth.  These pigs live behind a double row of electric fence and, like the other livestock, are moved around at intervals. 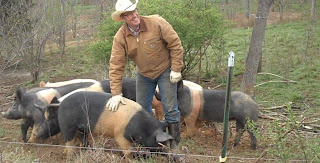 Like the pigs on Herrmannsdorfer Farm in Germany, they come up to you for a good scratch and the off chance you might have something in your pocket for them. This is a 2-acre lightly forested pasture divided into quarter acre paddocks. In addition to their foraging the pigs are fed local GMO-free grain. After they eat a ton they move on to the next paddock. What keeps the area from smelling at all is the continual paddock rotation. Compare that from being down wind from a hog confinement facility. The formula for keeping pathogens out of your heard is to go 21 days host-free (no pigs on the ground) to break the pathogen cycle … thus there is no need for antibiotics. This formula is the same for cows, chickens, rabbits (maybe even people).  This area gives the pigs a chance to wonder and play and to eat what ever they want to express their full pigness. No wonder they are so content. Man is probably the only creature on earth you have to tell what to eat.
At 200 pounds the pigs are moved further into the forest where their consumption drops in half as they forage for the grubs, acorns, and forest clutter.  This causes what is described as a “disturbance” in the ground that is essential for the health of the forest.  Again, the natural cycle of interdependency between animal and plant life is essential to a healthy ecosystem and tasty pigs. They are 200 pounds at about 6 months of age and ready for harvesting around 8 months after their last romp through the forest.
Salatin Philosophy
Successional movement always comes on the heels of a disturbance.  200 years ago the buffalo would have come through a million at a time, caused massive disturbance to the ground and forest from which the Great Plains and healthy forests grew. Think about the universality of this as relates to life and relationships.  When you have a difficult conversation with your mate, a new plateau can be reached in your relationship which otherwise wouldn’t have happened without working through that problem (disturbance).  Joel is a farmer’s philosopher as well.
Pasture
This view is of Joel’s neighbor’s pasture (top left) that hasn’t been grazed on since last November when the cows were taken in for the winter. That is all the growth for the past 5 months. In the foreground is Joel’s pasture where the pasture is much healthier. Why you ask?  Because Joel’s rotation cycle puts his cattle on his pastures 3 times a year instead of the traditional once per year.  In this picture this is the third growth cycle on Joel’s field. In his county, the typical cow days-per-acre is 80.  Using Joel’s program, he averages 400 cow-days-per acre and the ground is better off for it and produces more.

… and the ground hasn’t been plowed, seeded, disked, or added any chemical fertilizer in 50 years. In his forested areas, every acre offsets $500 in pig feed costs and his forests are made all the healthier for it.
Cow Manure & Carbon
During the winter when he shelters the cows, Joel optimizes everything. The cows eat local hay and every day each cow drops 50 pounds of material out their backside. As this waste builds up, he simply raises the hay-feeding trough with pulleys as the bedding beneath their feet builds up. 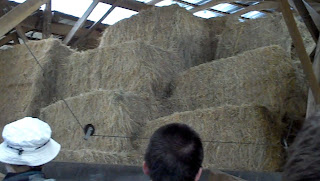 The manure is highly soluble and as it gets dry it will vaporize with all the associated odor.  If it gets wet it will leach into the ground and into ground water. The problem is that in the winter months all the bacteria are hibernating and can’t eat the manure, die to then pass the nutrients on to plants.   So Joel adds wood chips, junk hay, straw (all stored carbon) to create a massive bed of mulch.  The result is very warm (90°F) mulch that has no smell and is ready to be spread on the fields in the spring. To finish off the mulching process he moves the cows out and puts his pigs in for several weeks where they root around looking for corn he has mixed in to tempt them… mixing it all up with their snouts. 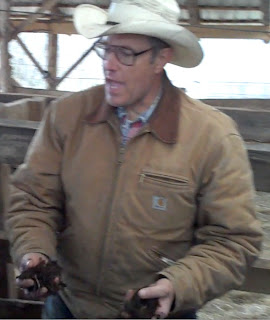 Size & Philosophy
Joel rents another 1,000 acres where he places former Polyface interns who follow his practices to grow organic products and sell through the Polyface CSA channel, offering more products to market. In order to stay within the ecological constraints of their farming practices yet still grow, Polyface has developed a multi-point convictional business protocol to prevent them from going from a good small business to becoming a bad big business. Polyface contrarian business protocols include:
1.     They can never have a sales target. Why, because they then begin to look at their people differently, their practices differently in order to meet the goal and in so doing, loose sight of their core values.
2.     No public stock or IPOs. Why, so as not to be tempted with a large chunk of cash to blur your core values.
3.     They only sell 4 hours from the farm. Why, so they don’t get distracted from being local and serving their community.
4.     They are not in the transportation of waste products business. All their waste has to stay on the farm. Why, to keep their wastes within the ecological limits of their farm and not to become someone else’s problem.
5.     No trademarks or patents. Why, because this forces them to be innovative and stay ahead of the copyists.  Wow, imagine having enough confidence in yourself to know you can stay ahead of the competition without building legal walls around yourself.
Like Polyface farm, it is important for Soper Farms to maintain its principles as well … in soil we trust and being good stewards of the earth.  If our size (974 acres) seems incongruous with the smaller size of many organic farms, Joel would beg to differ … just don’t loose sight of the reasons you are organic and/or sustainable in the first place and have a plan. Joel Salatin’s Polyface farm is an example of leveraging the natural interdependence between plants and animals with a farm that incorporates them all together.  It is like going back in farming time to create a sustainable future.