On December 11, 2009 I had the privilege to tour Wallace Farms and meet with Steve Wallace and his son Nick. They are into a multi-year program to produce grass fed livestock with their primary focus on cattle. Meet Steve (R) and Nick (L): 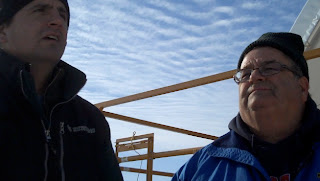 Their sustainable livestock operation has been under way for about 5 years on 160 acres and as Steve says … “it is a work in progress”. In addition to cattle, Steve and Nick have also raised chickens and turkeys. They also do conventional farming.

Two days before I arrived in Iowa they had received a record blizzard with temperatures dropping below 0o F. As Steve explained, the cattle did fine only given wind shelter from the south side of their high wall hoop building with additional bedding on the ground. 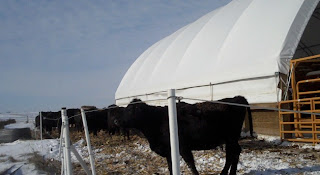 Their calving season is May/June though their first groups of pregnant heifers were spread out from May through July. Steve has since narrowed that window to May/June and expects to narrow the window more. 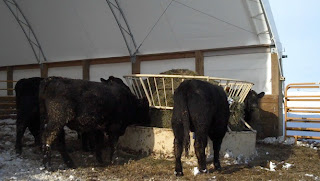 The finishing cattle (above) and yearling steers, were being finished on bailage this winterand separated from the yearling heifers to be bred and the cow/calves. Wallace has their own bull. The cattle seen above are around 1,200 pounds and about ready for market after about 18 months.

Nick commented that in some parts of Iowa, it was becoming a problem getting a kill schedule from lockers as they are in decline because a good local work force is becoming more difficult to find. Wallace however hasn’t been affected because of their ongoing relationship with plants in southern Minnesota including a USDA slaughterhouse about an hour from their farms that does lamb, pigs and cattle. Nick mentioned that Sioux City might be an exception. There is an outfit in/near Sioux City that does a lot of processing for Whole Foods. The small lockers are not federally inspected so Wallace can’t do business with them.

Regulations state that a non-regulated locker can only do “custom” work where the customer takes back the entire carcass for their own consumption. Iowa State inspected processors can sell their meat to the pubic within the state of Iowa. Wallace uses Federal USDA meat processors that allow them to sell their meat across state lines. They work with Lorenz Meat Processing in Canon Falls, Minnesota described as cutting-edge and is doing well as a USDA processer. Nick processes about 10 cattle a month there.

Nick does the selling and Steve does the raising. Nick’s business includes working with other small grass fed producers whose cattle are sold under the Wallace Farms label. Nick indicated he could sell more if he could find the grass fed cattle. Lorenz processes and hangs the carcasses for 7 to 12 days and does the cutting to Nick’s specifications to meet the preferences of his customers. The meat is put on pallets and shipped to Des Moines Cold Storage where it is frozen and stored. Nick uses Des Moines as his hub but is thinking about building his own locker on-site using a Morton building where half of it would include a 20’ x 30’ walk-in freezer.

In addition to selling meat, Nick also sells fresh wild fish he gets from Alaska. This gives him a broader offering for his customers. Wallace Farms can be found at (www.wallacefarms.com/). Nick has been successful by establishing his own “buying clubs” with three in Des Moines, one in each of Ames, Iowa City and Cedar Rapids and four in Chicago. He meets his customers in each buying club once a month and in Chicago every six weeks. His buying club members get an email the week before with a list of what Nick has to sell and then he meets them the next week at a designated spot from 4 to 6 pm where the buyers come to pick up their order.

Nick’s first buying club started with five buyers and grew from there. Growth has occurred through word of mouth and after registering with www.eatwild.com where customers could find Nick and Wallace Farms. On Nick’s last trip to Chicago he met with 107 buyers … it was a good day selling. Nick uses a pull-behind freezer trailer he bought last year and now it is already looking too small. Great marketing Nick!

Not All Grass Fed Beef Are the Same

Some larger companies Nick competes with compromise for expediency and will take grass fed cattle that are finished on DDGs (dried distiller grains) which is a high protein mash that is a by-product coming out of ethanol plants. There are many food brands whose marketing is less than honest when labeling their products. The more strict standards for “organic” and “grass fed” are being corrupted with marketing labels such as “natural”, “humanely raised”. The consumer has to be careful not to be confused. A trend that Nick is part of is selling “local” where customers can know their farmers and know their farming practices.

Steve and Nick are continually working on the best formula to cost effectively raise cattle in the winter. They don’t use grain or DDGs, just high quality pasture. They have grown sorghum and Italian Rhys grass. It is critical to their efforts to extend the grazing season from October into December. They do that with oats, rape and turnips, that are planted twice, the second planting in July is then ready for grazing in November and December.

I asked about their thinking between planting annuals or perennials. Steve explained that when he plants perennials he gets about half a crop the first year because he can’t graze until the pasture gets established. The following year he gets a big crop and then thereafter it gets a little lower. They are deciding on whether it is better to do annuals or perennials, perhaps a combination but not necessarily in the same pasture.

Steve’s expertise on forage comes both from his having his own herd and his off-farm job as Territory Manager for Barenbrug USA. Barenbrug is a plant breeding, seed production and seed trade company (www.barusa.com). Steve is a great contact for grass farmers in his territory.

Steve’s observation is that sandy (light) soil like Walnut 22 is easier to establish pasture in than the heavier soils. Sandy soil has a rating of 5 or 6 while heavier soil has a rating of 20 (I’m not sure what the scale is). Steve is a grass farmer. What he then grows from his grass are livestock. All agreed that it is ALL about the soil … poor soil, poor quality livestock, great soil, high quality livestock.

The day I visited they were feeding their cattle bailage. Steve believes that this is the best forage you can feed a ruminant animal to finish. His bailage is mostly hay (tall fescue) that is cut green to get high moisture. We discussed the logistics of bailing. One thought is you cut late in the day when the sugar content in the grass is highest. The sugar levels in grasses depend on the type of grass, the time of year and when you cut it. That said, logistics and weather rule most timing decisions.

To make his bailage for winter he cuts in October using round bails that are covered with plastic to keep moisture in to retain moisture and promote fermentation. One differentiator between bailage and silage is that bailage isn’t chopped. 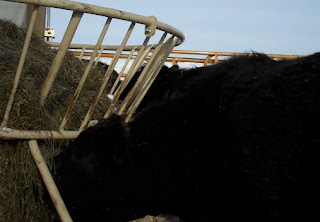 They graze as long as possible until winter weather makes it difficult and then use bailage to offset lower winter forages. Steve’s belief is that cows were designed to eat foliage rather than corn and that is the best way to get good results and great tasting product. We discussed that our plan for livestock on Walnut 22 included an irrigator, Steve pointed out that irrigation changes everything. With water, we have a broader choice of forages to choose from.

Both Nick and Steve had great things to say about including poultry in the livestock rotation. In their experience chickens are good but turkeys are even better because they take care of themselves. Turkeys eat grass and chickens don’t. Steve estimates as much as 70% of a turkey’s diet could be grass. Steve and Nick think poultry is a key part of a pasture program. By their observation, three weeks after the poultry leave the paddock, the grass grows “like hell!” It is labor intensive but makes money and is great for the soil.

They first started out on an organic path but became frustrated at not having enough nitrogen in the system and the pasture was poorer. So they decided to put ammonium sulfate on for nitrogen but that eliminated the “organic” program. As a result they market their beef successfully as grass fed, no artificial hormones or antibiotics. Having their beef being local and sustainably grown is what their customers want. Steve went on to explain that modern farming techniques over the last 50+ years has fundamentally changed the soil between the use of anhydrous ammonia, high tillage and oil-based inputs used as part of GMO crops.

Steve explained that grass fed beef is $2.00+ a pound (hanging weight) compared to organic beef at $2.25 maybe $2.40 a pound hanging weight. Organic equates to about an extra $150 difference per animal. In their program Wallace Farms makes more money selling grass fed beef versus organic beef. Nick pointed out that Organic Valley (a large organic distributor) only want to take cattle like theirs that have been grass fed, then finish them on grain to get, in their view, a more consistent product. Funny how the term “grass fed” seems to get more “flexible”.

The Land and Long Term Commitment

For Steve and Nick, restoring our soil to sustainability is a long term effort but well worth the effort. 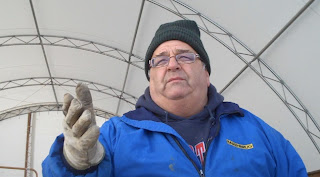 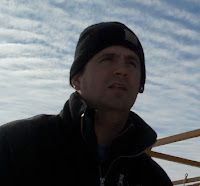 Their view is that land, sustainable land, will soon become the most important thing. They don’t buy gold, they buy land.