Could soil hold the most promise to combat climate change? 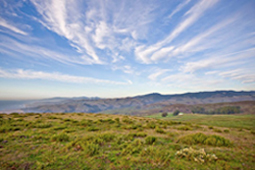 On Friday, October 30th 2009 a group of about 40 gathered in the equipment shed at Toto Ranch located in the hills overlooking the beaches of Northern California near San Gregorio, California. The pictures included here only begin to capture the beauty of this place.

Toto Ranch’s 952 acres of rolling hills is a grass-fed livestock operation and just this year was put under the protection of the Peninsula Open Space Trust (POST). That easement limits the property’s development potential so as to protect natural resources including critical wildlife habitat, important watershed land and panoramic views of the San Gregorio and Tunitas Creek valleys.

Hosted by the non-profit group, Conexions, we gathered for this workshop to learn from Darren Doherty about “Carbon Farming”. It included pasture soil development, Keyline farming principles and the use of a Yeoman’s Plow as part of a field demonstration.

Darren is a permaculturalist who has practiced, preached and consulted carbon farming for over 15 years having designed and developed over 1,100 properties worldwide. To his question, “Could soil hold the most promise to combat climate change?” the answer is a resounding YES … and farmers hold the keys because soil represents the largest carbon sink in the world over which we have control.

“How much carbon is in soil?” Darren explained “soil with 5% organic matter to one foot of depth and a bulk density of 1.2 g/cm3 has about a ? inch of pure carbon in it … 35 times the amount causing global warming”. Imagine if grain farmers practiced cover cropping and livestock producers used rotational grazing, how improved our climate would be. To reverse global warming a significant portion of carbon has to remain in the soil in a stable form.

Darren’s focus in this workshop was on grazing with some examples of grazing practices to work towards.

Grazing “tall” – yields a more developed root system as shown in these examples:

Afternoon Grazing – increases forage sugar. Afternoon grass has 37% more sugar than morning grass. This peaks about 6:00pm. As pointed out by a dairy farmer, “We jumped five pounds of milk per cow per day when we began restricting morning grazing and strip grazing from mid-day onward.” Does this suggest the best time of day to move your mob?

Spring grazing – Lewellyn Manske, Dickinson Center, University of North Dakota was quoted saying that spring grazing begins in the fall. Light defoliation (25% to 33%) allows translocation of above ground sugar to root systems to be exuded immediately after the bite. This stimulates root-zone microorganisms, including AMF which then solubolize N, P and other nutrients for re-growth. The effect apparently lasts the entire season and overall biomass production increases 40 to 70%. The take home lesson: Don’t graze a chunk of pasture this fall, let it go into winter with full standing cover. In the spring, graze it lightly after 3 inch leaf and see what happens. You won’t go back!

Darren’s focus in this workshop was on grazing with some examples of grazing practices to work towards.

Prior to our field demonstration of a Yeoman’s Plow we learned about Keyline farming practices to which the use of a Yeoman’s Plow (similar to zone tillage). The Keyline is a permaculture farming technique used for water management. According to permaculture literature, Keyline integrates terraces, ponds and cultivation techniques with the natural landscape to infiltrate water into the soil efficiently and hold it on the land as long as possible. In order to truly work with nature, implementing a Keyline system requires careful observation and assessment of a site. Carbon sequestration is also an important by-product of using a Yeoman’s Keyline Plow.

To have a Keyline you need two key points. A key point on a field is the point where a ridge stops going up and begins to slope down. At that intersection between up and down is a key point. On the other side of this depression in the landscape where the valley stops going up is another key point. Drawing a line between these two key points creates your Keyline. Perhaps this graphic will help explain. 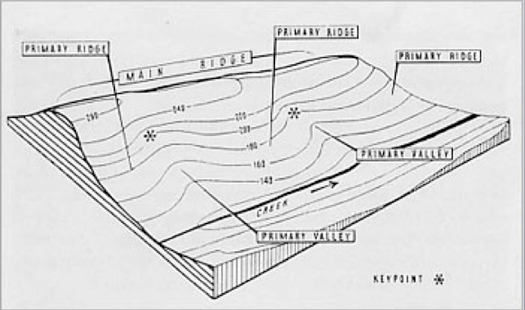 Source: The Geographical Basis for Keyline

Source: The Challenge of Landscape 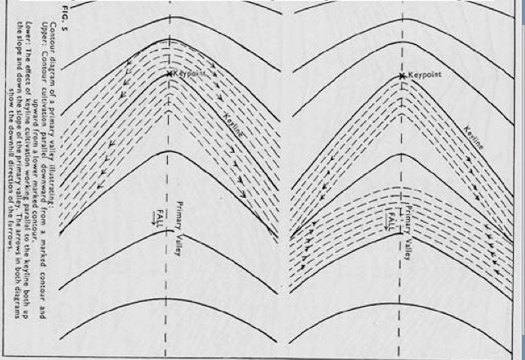 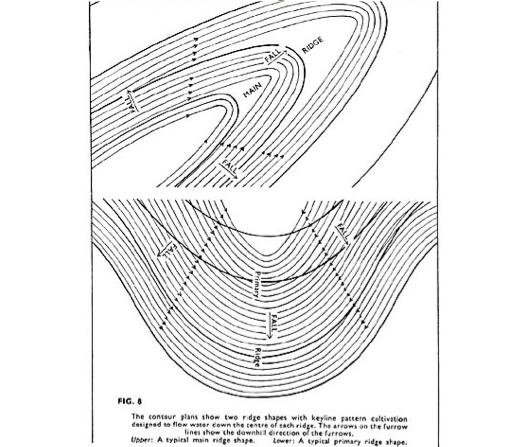 Source: The Challenge of Landscape

When using a Yeoman’s Plow for pasture subsoil development permaculture practices recommend following the Keyline. It isn’t the goal here to teach Keyline Farming but to plant the seed for the reader to explore. Here are some resources.

The Idea Behind Subsoiling Pasture

The goal in subsoiling is to repeatedly create ideal conditions for plant growth and aerobic soil organisms to convert subsoil to topsoil. By using a tool such as the Yeoman’s Plow or similar implement, the soil is mechanically loosened to increase water absorption capacity, aeration and allow the rhizosphere (root zone) to successively penetrate deeper. As a result, subsoil is converted to topsoil as plant rhizosperes extend further into it, bringing attendant biology and metabolic by-products with it. Roots exudate and sloughed-off roots serve as carbon sources.

The mechanics of a subsoiler. 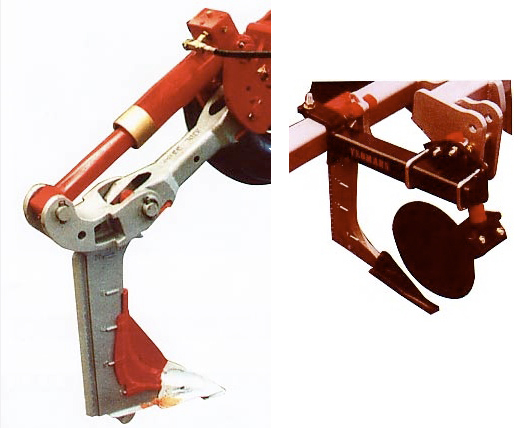 In action the plow first cuts the grass with a disc followed by the shank that can be set at variable depths. 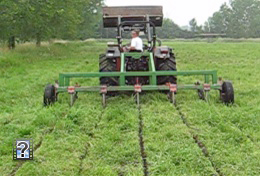 The distance between shanks can be adjusted. After the first pass over the field it is advised that the soil be given a chance to benefit for a while before a second pass is made going down the middle of the previous path. Because this tool is used less frequently for subsoiling purposes (this needn’t be done regularly) it makes a good implement to share with neighboring farms.

It was an excellent workshop on a gorgeous ranch, both leaving me inspired. Let me leave you with these parting thoughts:

“If we don’t take care of soil which is only the first 5 centimeters on this earth’s surface, our lives are condemned” – Dirt the Movie

A handful of soil holds tens of billions of microorganisms … that is unless farmers have dumped herbicides and insecticides on it while tilling these critical carbon sequesters to death.

A third of our topsoil has been lost in the past 100 years due to industrial farming practices.

Rapidly increasing Soil Organic Matter is the most important job in the world, and only farmers can do it … and should be paid to do it.

Humans have relocated 50 – 80 % of the organic carbon once in topsoil to the atmosphere in the last 150 years … no wonder we have a climate problem today.